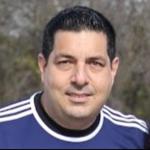 For Jose Hernandez, it is a privilege to be Head Coach for FC Premier. He is excited for the opportunity to coach the 07 and 08 Girls teams. Coaching is his passion. This year will be his 12th year of coaching boys and girls. He has coached in North Texas since 2014, previously he coached in Venezuela.

On a personal level, Coach Hernandez grew up in Venezuela where he got his passion for soccer. He attended University Rafael Urdaneta in Venezuela and Oklahoma State University. He holds a United States Soccer Federation F coaching license, grassroots courses as well as a Venezuela coach certificate. He is working on getting a USSF D license this year.

As a coach, his ultimate goal is to develop players and sportsmanship values. He helps his players identify their personal strengths, building their confidence and seeing their growth with hard work and practice. Coach Hernandez is devoted to Total Football, positional play style and he demands sacrifices for every position on the field in order to keep possession of the ball. He urges his team to play with courage, audacity and joy. He believes in a dynamic game that favors quality over quantity.